IBOC is a hybrid method for simultaneously broadcasting digital radio and analog radio in the same frequency band by placing additional digital subcarriers in the sidebands of the AM or FM channel.

The CDR standard, operational since November 2013, is labeled as GY/T 268.1-2013 and was published by the authority State Administration of Press, Publication, Radio, Film and Television of the People’s Republic of China (SAPPRFT).

At the spring NAB Show SAPPRFT’s Director of the Academy of Broadcasting Science, Peng Chao, held a session focusing on the background of the CDR Project and the general state of digital radio broadcasting in China.

Gao explained that in 2011, the Chinese Academy of Broadcasting Science, TiMi Tech and various broadcasters began working on the CDR research project, carrying out lab and field tests and drafting the standard. 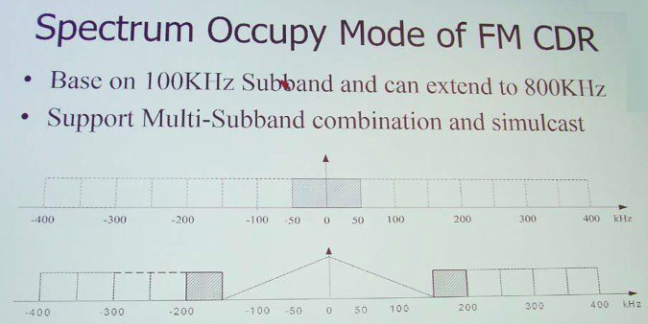 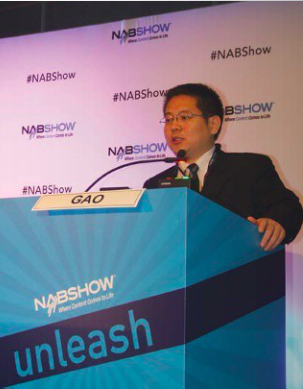 Peng Gao, director of the Academy of Broadcasting Science at SAPPRFT, speaks to the audience at the spring NAB Show.

CDR’s key features include flexible spectrum utilisation modes and the capability to fit both FM and AM broadcasts. As regards to error-correction, CRD developers decided to use LDPC algorithms as the main FEC. This, says Gao, proves more powerful than other FEC system currently used in other digital radio standards. Audio compression is based on the Chinese DRA coding scheme.

In the FM band, CDR transmission modes are based on 100 kHz sub-bands, and a single broadcast can span over 200 to 800 kHz. The simulcasting of analog FM and digital signals requires a 400 kHz channel. Digital-only broadcasts require a minimum of 200 kHz to 800 kHz.

Depending on the LDPC code rate and the adopted transmission mode, net bitrate ranges from 36 to 356.4 kbps per each 100 kHz sub-band, with a maximum spectrum efficiency of 3.56 bit/Hertz. A single 200 kHz channel can then carry a useful bit rate ranging from 72 to 712.8 kbps.

“According to our studies, CDR requests a minimum C/N ratio, which is about 2 dB lower than the C/N required by DRM systems under comparable receiving conditions”, said Gao.

“This is also due to the efficiency of LDPC error correction algorithms,” he specified. Gao illustrated how under typical AWGN conditions CDR (FM) requires a minimum C/N equal to -0,57 dB, while DRM requires 1.3. In SFN operation, CDR minimum C/N is equal to 3.66, while DRM 5.4.

“Three trial networks are presently on air in Beijing, Guangzhou and Shenzhen”, Gao said. “And by the end of 2016, CDR broadcasts will be available in more than 560 cities.” The expected coverage at the time will span from the southern to eastern regions of China. 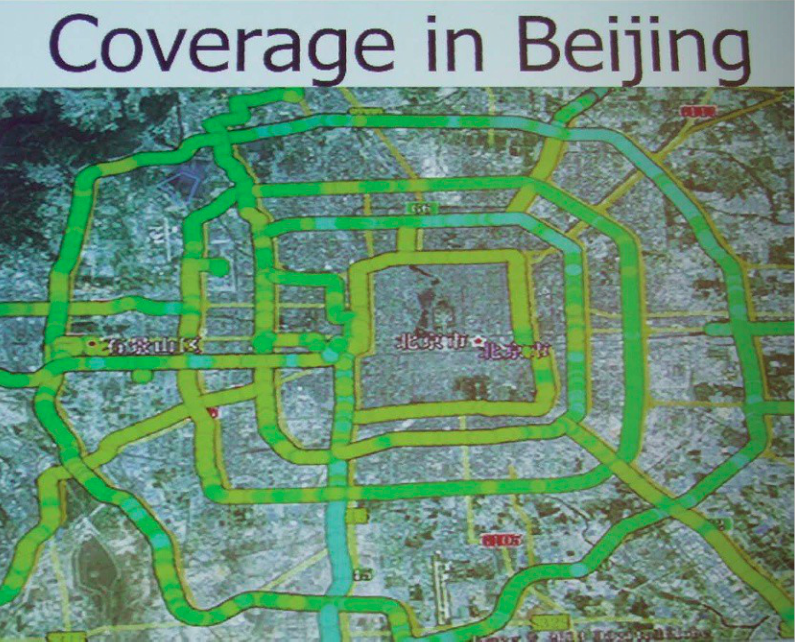 On the receiver side, Gao presented the latest generation of silicon chipset, with a footprint comparable to the smallest coin available in China, and commercial receivers are now avail¡able on the market from leading manufacturers. Portable receivers feature a single-board layout, with onboard SoC chipset, SD card reader and USB ports. The form factor is comparable to same-class analog receivers
With a potential market of more than 1 billion people, and a substantial commitment by Chinese authorities toward digital radio, the country may soon boast he highest number of digital radio listeners worldwide, thanks to its own “home-grown” CDR digital solution.

Davide Moro reports on the industry for Radio World from Bergamo, Italy.